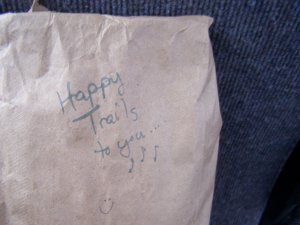 I made it through day one of travel! With no major catastrophes! I feel as though I’m competent, or something!

Okay, and I’ve also used up my exclamations marks for the day. Possibly for the month. *cough*
At any rate, I’m safely in St. Johns! Daddy drove me up to the bus stop in town, and five hours later, there I was, at the MUN student centre, in TOWN! Opps, exclamation marks again. *cough* The bus ride was mostly uneventful. I dosed and watched the trees go by. For a little while, I will admit, I was watching the trees with extreme interest, because the seats in front of me were occupied by a teenage couple who proceeded to kiss each other for about half an hour, (or half a century, you know.) He had a lip ring, too, which just looks technically difficult. And then they fell asleep in the same seat together, which is another technically difficult thing. I mean, those seat are not that large. *shakes head* But they were silent after a time, and I zoned out. Mommy had packed me a decorated lunch- see above- and I occupied my time with eating that, too. Then PT picked me up at the Student Centre, which was lovely. (I was delivering some presents from home.)
Incidentally, the bus stop in St. Johns is right outside the student bar, and today was the last day  of exams. We therefore witnessed some shockingly short skirts on college girls. I’m pretty sure at least one of those outfits was technically just a shirt- glued down. When your skirt is so short you can’t move without a privacy shield, you know you have issues.
And then PT and I booted about Downtown St. Johns. (Caught the exclamation mark just in time.) Due to the darkness, I couldn’t get many good pictures, but I caught a semblance of the view from Signal Hill.  See, isn’t it pretty? 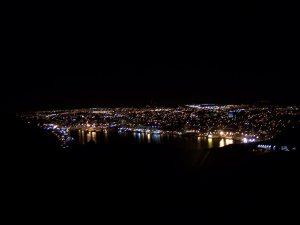 We also talked about going DOWNtown. You see, it’s PT’s Birthday *checks clock* now, so legally he could go drink now. However, if he had a celebratory drink, that would leave me driving a standard car, through a notoriously hard to navigate city, in the dark. And the alternative idea of me tipsy can reduce strong men to tears of terror. (Not that I’ve tested this, but it should okay? okay?) So we had ice cream at DQ instead.
Now I’m checked in to my very own hotel room, about to collapse and sleep. Sounds like a good plan, if I do say so myself. Shalom!